In 2012 we met Emma and Julie, CEO’s of Matthew’s Friends Charity, and as one of our first ever commissions, made them a promotional film about their charity and the work that they do.  This film introduced audiences to her son Matthew and the incredible effect the Ketogenic Diet had in treating his drug-resistant epilepsy.

Matthew suffered catastrophic seizures from a baby and despite being prescribed multiple anti-epileptic drugs, no drug or treatment worked.  As a result Emma was told that Matthew would probably not live beyond age 12 years.  Through self-research Emma found out about a controversial treatment called the Ketogenic Diet, a high-fat, low-carbohydrate medically prescribed treatment that can reduce seizures. Emma asked Matthew‟s Neurologist to try the diet and was told that it didn’t work, it was disgusting and medication was the best option. Only when Matthew was 7 years old did she finally get the chance to get Matthew onto the diet thanks to the trial that Professor Helen Cross was carrying out at Great Ormond Street Hospital. Within 2 weeks of starting the diet Matthew’s seizures had reduced by 90% and within 8 months he was off all medication. The Ketogenic Diet was the best thing to ever happen to Matthew and in 2004 Emma launched The Matthew’s Friends Charity to share her experiences with others, provide support and promote the use of the Ketogenic diet for those suffering with intractable epilepsy.

Over the last 14 years Matthew’s Friends has been at the forefront of support, information and research in Ketogenic Dietary Therapies and we have had the privilege to document the extraordinary effect this treatment can have on children and adults suffering with neurological disorders.  As well as helping families and patients, Emma and Julie and the team at Matthew’s Friends work tirelessly to support professionals all around the world who want to learn about and perecribe the Ketogenic Diet for their own patients.  In 2016, Matthew’s Friends KetoCollege was launched, a comprehensive 3 day Ketogenic training course for medical and dietary professionals.   Curated by and featuring world professionals in dietary therapy,  KetoCollege revolutionised training in Ketogenic Therapies so that even more patients across the globe can have the choice in using this proven medical treatment. 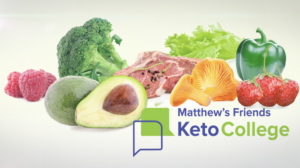 The success of KetoCollege inspired the team at Matthew’s Friends to produce a series of KetoCollege films for international professionals in developing countries. Alongside Emma Williams and Professor Eric Kossoff, we produced 11 films featuring world experts who present scientific background and practical training in all aspects of implementation of the different Ketogenic therapies. Today these films are officially launched and we are incredibly proud and honoured to have been involved in this revolutionary series, helping even more professionals provide this life-saving treatment.

For further information about Matthew’s Friends and the Ketogenic Diet visit, matthewsfriends.org.